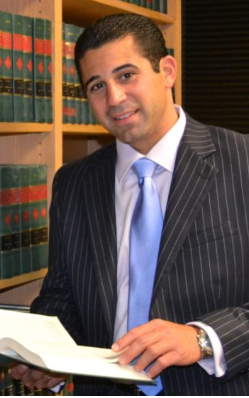 GET IN TOUCH
In 2017, I was fortunate enough to achieve a New York Metro Super Lawyers Rising Star nomination – for the FIFTH straight year. While only the top 2.5% of attorneys in New York have received this distinction, I have the top friends, family, clients, and referral sources out of all of my peers. Thank you!

I started my career as personal injury litigator in New York City. Over the years, I have worked on both jury and non-jury trials in the areas of general negligence, automobile negligence, and business litigation. Additionally, I bring to my practice a wide variety of legal and non-legal experiences including those I acquired while working for two Fortune 300 companies.

I attended Quinnipiac University’s School of Law and School of Business where I ranked amongst the top of my first year law school class. I graduated Cum Laude from the Juris Doctorate program and earned a Masters in Business Administration from the business school. During my time there, I achieved dozens of awards of recognition. Most notably, I earned the coveted Distinguished Academic Achievement Award (for achieving the highest grade in his class) in: Advanced Legal Writing and Research, Law Office Management, Trial Practice, and Advanced Trial Practice. Additionally, I was the President of our Moot Court Honor Society and my team won second place in a National Moot Court Competition.

Although I was born in Bronx, New York, I reside in New Rochelle, NY with my wife and two daughters. I am licensed to practice law in New York, Connecticut, New Jersey, Washington DC, the United States Supreme Court, and also the Southern and Eastern District Courts of New York. I am a licensed Real Estate Broker and a real estate investor.


2016
Maintaining the Integrity of Your Escrow Account & Your Law License. March 14, 2016.
Land and Development Restrictions: Easements, Adverse Possession and Other Property Obstacles. April 7, 2016.
Tax Certiorari for the General Practitioner. May 12, 2016.